“Boy, don’t you worry.
You’ll find yourself.
Follow your heart,
And nothing else.
You can do this,
If you try.
All that I want for you my son,
Is to be satisfied.”

I am writing this blog on a front porch, of a family I have never met, in a city I have never been and it is beautiful outside.  The sun is out, the air is crisp, and the sky is an endless shade of blue.  I am in suburbia right now, choosing to stay in a families home over a studio apartment in downtown Bozeman, Montana.  Why?  Because I have been in so many cities recently, and I have also been by myself in the mountains and the woods, but I haven’t been in a home.  I haven’t seen a married couple with kids, a front yard, a dog, a real life Norman Rockwell painting.  And it is lovely.  It’s quiet, beautiful, and all together simple.

In my last entry, I left with saying I needed to prove that Happiness can be real, without being shared.  Well I kicked off the solo journey and dove right into this theory.  I left Vancouver and instead of deciding between Jasper or Banff, I chose both.

I drove 8 hours in the rain, albeit scenic, to Jasper National Park.  Reality came to a vivid realization as I tried to set up the tent me and Ashley were using (a 6 person pop up tent) in the torrential downpour at 6pm in the evening.  In the mountains.  In the cold.  Alone.  Needless to say, it takes two to tango… and it also takes two to put up this damn tent.  After the leg snapped and it caved in on itself, I had two thoughts.  One) Get my Axe and tear this thing to shit or Two) Look up at the rain, have my Andy Dufresne (Shawshank Redemption) moment, laugh it off and get out my brand new, never been opened, back up tent.  And that is what I did.

There was literally nothing else I could do, so I crawled inside this mini tent in the rain and mud, brought in my stove, lap top, and whiskey, made dinner (Beef Chili in Freeze-Dried Form), watched Warrior  (fantastic flick) and drank some whiskey before falling asleep to my own personal sound machine.  It was actually quite nice.

I woke up the following morning, broke the frost to unzip my new tent (It gets below 30 in the Canadian Rockies at night) and went off to explore.  I found the Mt. Whistler Tram and for $37 I thought it may be a rip off, but holy shit, 7 minutes later you’re amongst this panoramic view of pure glory.  Then you’re free to hike a mile + on your own to the summit which is a sketchy hike but again, worth it.  I was up there completely alone and talk about having a moment, I literally peaked.  For my first solo-adventure on this trip, I set the bar pretty damn high. 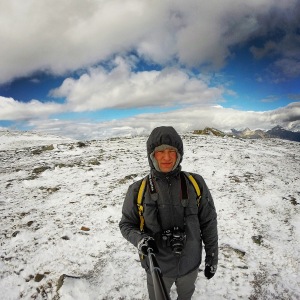 I had to get going though so I took the tram down, got in my car and drove the Glacier Parkway to Banff.  This is no ordinary drive, it is ranked #2 most scenic drives in the World.  And I have to agree.  I took the top off my Jeep (and bundled up since it was a nice 44 degrees) and was just in awe.  It’s as if these enormous mountains stand parallel with the road, acting as body guards.  I was constantly pulling over and taking pictures, even now reminiscing I wish I could do it all over.  Especially because once you arrive in Banff, you know, this is something special.

I made camp upon arrival (after getting lost of course… I am complete shit with directions) and made some food that didn’t come out of a Freeze-Dried Bag.  A can of Chef Boyardee Ravioli.  The next morning I got up early because I had a long day of hiking around Lake Louise.  If you had not previously heard of Lake Louise, click that link.  The water is a turqiose blue due to the melting glacier water mixing with the rock sediment.  It is stunning.  As was the 10+ mile hike around the mountains with a 1,000 foot gain in elevation (it should have been about 7 miles, but you know, the whole getting lost thing got in the way).  I came down from the mountain, sweaty, smelly, but oh so happy.  I got back to camp and made a hearty meal of actual food (Bacon and Eggs) and reviewed my 437 GoPro pictures. 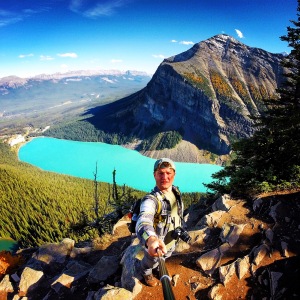 The following morning I packed up, went to the little town of Banff (just like a Ski town) and had some Beer, Chicken Wings, and chatted with some fellow nomads.  It was perfect.  I said my goodbyes, breathed in the air, parted with the view, and drove on to Calgary.  Better to leave wanting more, than to overstay your welcome.

I drove the couple hours to Calgary, went to a bar, used the wi-fi and found an airbnb in Kensington.  It was a great little neighborhood and I actually knew someone there, so I set my stuff down and met a friend for dinner and drinks.  She is getting married this weekend so I was pretty honored she took the time.  We went to a wine bar and I ordered Alberta Beef Short-Rib with Gnocchi in a Chocolate-Espresso Sauce (being fancy never tasted so good) and we each had a few glasses of wine.  Now, apart from my scenic abundance and virtue,  one of my favorite things in life is to get to know someone.  I had known this friend through other friends, but never had an actual one-on-one conversation with her.  I’ve been told I am good listener and maybe because I find it completely fascinating to get to know someone.  I love asking questions and talking about all things within our life… I think this is a lost art these days.  So often now we know someone by social media stalking before we actually get to know them as a person.  So it was really nice to just sit and talk and get to know this friend on a true and sincere level.

Anyways… I explored Calgary the following day (as well as went to a movie by myself, another one of my favorite things to do in a foreign city) and really loved it.  It was beautiful, outdoorsy, filled with genuine people and they also have a serious passion for Golf.  I even made a rock climbing friend at a bar (amazing what going to a bar by yourself does!).  But it was time to go so I packed up in the morning and headed out to Glacier National Park in Montana.  Back in the ole’ U-S-of-A.

I thought to myself that no way could anything rival Banff.  But then I drove into Glacier and was blown away.  The colors… It would have made Dr. Suess proud.  Plus I saw a Black Bear and Grizzly on the drive in.  So that was neat.  I made camp (away from the bears) and had a quiet night of reading and soup.  The next day, an insane 12 mile hike to Grinnell Glacier with a 1600 foot gain in elevation.  It took me around 6 hours but it felt like I had traveled to another world.  Never in my life have I stood on an actual glacier… I mean that is something you only see on Discovery Channel right?  It was insane.  A giant block of ice half floating in the water, I expected a Polar Bear to round the corner… But this Glacier as well as the others are melting away very quickly.  I am not much of an ecologist but I saw the markings of where the Glacier was several years ago and how much it has shrunken, and if you don’t believe in Global Warming, well you’re dumb.  The melting glaciers in the Arctic are already having a serious effect of Polar Bears as scientists are seeing cannibalism for the first time between Male’s and Female’s and/or babies (thanks Portland Zoo!).  Sorry, off my tangent.  I hiked down, met my neighbor campers and we had some beers.  Found out they are “marathon travelers”, meaning they travel around the world running marathons.  The guy actually set the record for running/hiking Machu Picchu in 7 hours.  It took me 5 days.

I got back to camp, made an incredible sandwich (Chicken Sausage stuffed with Red Peppers and Mozzarella, Cooked Onions, Toasted Bread, and Buffalo Sauce) and then passed out at 8pm. 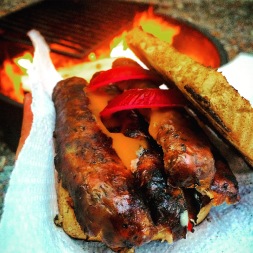 I took the scenic Road-To-The-Sun drive through the park the following morning, did a short 2 miles hike with a 700 foot elevation gain, and then relaxed at camp.  I wrote a lot in my journal and kind of decompressed.  I have been constantly going and it was nice to just sit and do nothing.  I came to terms with a few things, one being, when you are alone in the woods at night, every single noise you hear is a bear.  Two,  you have a lot of moments.  I keep thinking of Garden State in the scene when they’re sitting by the fire and he is talking about his youth, and Natalie Portman says “You are in it right now, you are so in it”.  And you know, I was.

I know that maybe 10 people at most may read this blog, but of the 10, if it relates to just one… well then I am happy.  I know I am full of faults, I can be overly sensitive, or not enough, rude, I have a silver tongue and I don’t bite it enough.  I am impatient and overbearing.  But you know what, when I was sitting around the camp fire, with just my book, my beer, and s’more… I was none of those things.  I was just me.  And it felt really nice.  I think I had the wrong idea when I entered this trip.  I kept thinking, I wonder when I will have my a-ha moment and lose my baggage.  But I won’t.  I didn’t have anything to lose, the past makes us who we are.  What I’ve come to realize is I am actually finding something on this trip, something I lost years ago… So back to where it all began, the idea of Is happiness only real when shared?  Well no… Because I was happy realizing things about myself in which I could have never done if someone was with me.  There is a Lynyrd Skynyrd song called ‘Simple Man‘, and I’ll never forget the first time I heard it when I was 16 working at a family friends construction warehouse.  It’s been an important song to me ever since, something I once resonated with but have since lost… and as I sat there around the camp fire, much like I am sitting on this porch, much like several moments when I am alone and simply taking it all in… I am realizing that maybe… just maybe, I am more of a simple man than I thought.  I had lost that notion through the years… but slowly, hopefully, I am getting it back. 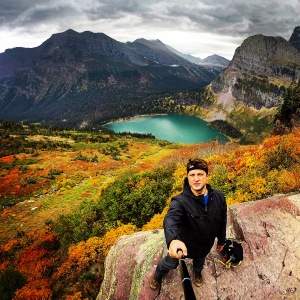 4 Responses to A Continuous Telling of Road Trip Adventures