“They always say time changes things, but you actually have to change them yourself.” – Andy Warhol

Ok, so let’s not waste your time, to begin from where I left off – the quaintness of the hotel life was quickly interrupted by the beauty of the outdoors.  We left the hotel early in the morning and drove through the Redwood National Forest in Humboldt, CA.  It was something out of this world and in the world of Fern Gully or Honey, I Shrunk the Kids. 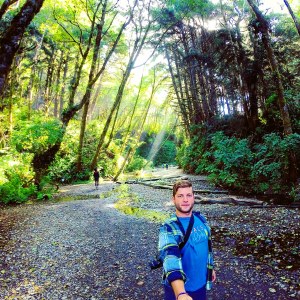 We explored the riverbeds within the giant Sequoia trees, hopping over logs, walking along little bridges, taking it all in (without trying to fall in).  You couldn’t help but feel as if this was a giant playground for adults.  The dust being kicked up by our boots and contradicting the harsh beams of light breaking through the trees, it was like little Jesus moments everywhere you looked… pretty spectacular.  And then the kicker, we walk out of the woods and onto a huge beach covered in fog.  You could barely see 100 ft in front of you as you traverse the rolling sands, and we went from Disney movies to Lost In Space or John Carter (if anyone even saw that, I didn’t, but it looked like Mars starring #TimRiggins).  It was really beautiful and I randomly had service so I facetimed my mom and niece.  And also took a selfie while doing so.

From the Redwoods we trekked up 5 hours to Crater Lake National Park and went from California into Oregon.  I had seen photos of Crater Lake on Instagram but really knew nothing about it.  To give you some brief information: Crater Lake was formed 7,700 years ago when the Mount Mazama Volcano exploded, the lava rushed around the sides of the mountain, melting away and collapsing in on itself to form this crater.  So basically an implosion that resulted in the deepest lake in the US at 2000 ft.  The water is so blue because there are no rivers flowing into it and therefore no pollutants; it is purely rain and snow water which gives you a visibility of about 140 ft (that is also known as SCUBA porn).  The lake is freezing cold as it rests 6000 feet above sea level which makes camping there amazing but damn cold at night (in the 30s and 40s at night).  Native Americans do vision quests here as they believe the lake to be sacred for it formed in the battle of the Sky God and the Underworld God where Mount Mazama was destroyed.  I’ll tell you what, you drink 6 beers at 6000 ft and smoke a joint, you’ll have your own vision quest (note that Weed is legal in Oregon, but not in the National Park).

There is only one major campsite that takes reservations so we camped there (Mazama Village Campgrounds – we took site F2 and it was fantastic).  We drove around the rim of the lake and took a hike down to the bottom and did some cliff jumping.  You can do a boat tour but we’re not 75-year-old grandparents so we just jumped in from a 30 ft cliff (props 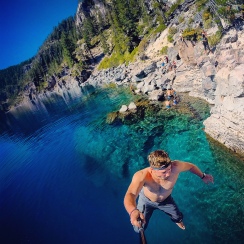 to the one grandparent who also jumped in – Legend!).  We relaxed around the campsite and took it easy – it was a nice change of pace from Yosemite which felt like the Manhattan version of National Parks compared to Crater Lake which was like small town Missouri.  Quiet, calm, and serene.  We made some older friends who took the site next to us (Hi guys if you’re reading this – I gave them my Locals Only business card because I’m classy) and had some beers, food and told ghost stories.

I cooked Jalapeño-Cheddar stuffed brats with baked beans and roasted Brussels sprouts with onions the first night and the second night (cooked by Ashley!) was more brats and a prepackaged Beef Stroganoff (freeze-dried type of food) and it
was actually really good.

All in all it was a spectacular couple of days and Crater Lake remains one of my favorite destinations I have ever been.  I dig the quiet life like that when camping… and those pictures on the lake.  I mean c’mon.  I am really finding myself at home on this trip and while I may annoy some of you with my constant posting – to me, this is one of the happiest times I have ever been.  Too often we get stuck in life’s routine of the hamster wheel and it’s only when you break out and take a step back, you realize that the wheel will be there when you get back, still spinning as if nothing has changed.

I like to think of that quote from Benjamin Button,

“It’s a funny thing coming home. Nothing changes. Everything looks the same, feels the same, even smells the same. You realize what’s changed, is you”.

I know change is scary, but it’s worth it.  It’s been beyond incredible to receive feedback from people who associate with my feelings of wanting to quit your job and go explore – it’s like we all share this same secret but don’t know what to do about it.

Anyways… After leaving Crater Lake we bypassed Eugene, OR (where the University is) and had some pizza and beer (obviously), then drove up to

Portland where we are now.  We rented a place in the Alphabet District off NW18th (airbnb) and while it is a major contradiction to the camping life, I find myself adjusting nicely to this town.  I love being able to walk outside and see people, explore different coffee shops, breweries, life within the streets.  It feels like Fall here and I love that.  It also looks like the town in Hocus Pocus.  And again, I love that too.  Seriously I am just really positive lately – and like I stated in that initial blog, I believe that energy is contagious.

Lastly, it has to be noted that everyone needs some personal self reflection time or solo time or whatever you want to call it.  After spending 8 days with one other human in such close quarters, I needed some me time.  Today has been that and it has been wonderful.  I went to the Zoo by myself, took my car to get an oil change, walked around a book store, now I am at the apartment writing this and when I close my lap top (after maybe one episode of LOST) I will walk to Deschutes Brewery and have myself a beer and maybe an appetizer, and then get my car, find parking, and three hours later after I find a parking spot I will go to a bar and watch football.  From Crater Lake to Sports Bars.. funny how things change on you… hopefully you change with it.

4 Responses to The Road Trip Continues