Why I Quit My Job (and Decided to Road Trip): The Pursuit of Happiness

“We travel, initially, to lose ourselves, and we travel, next, to find ourselves. We travel to open our hearts and eyes. And we travel, in essence, to become young fools again—to slow time down and get taken in, and fall in love once more.” Pico Iyer

There was a television show I was watching in which this beautiful story was told paraphrasing William Faulkner. In the story, a father gave his son a watch that had been handed down through generations.  The Father told the Son, that he was not giving him this watch so that he could remember time, but rather so that he could forget it once in a while.  And not spend his entire breath trying to conquer it.

The ticking clock… We all have it. Especially in American society where we have this idealism bestowed upon us from such a young age.  It contradicts our entire ideology of the pursuit of happiness.  How do we know what will make us happy when we are so young? How do we know what to be, or who to be?  And what happens if it doesn’t work out?

Think for a second and answer: what truly was the happiest time in your life?  Mine was probably on a huge family vacation when I was 16 in Mexico. Not a care in the world. Surrounded by family, friends, and an open bar (which also resulted in the worst hangover of my life).

And maybe again when I was 18 years old, for it was the first time I was actually in love. But I was told that I have to figure out my life.  I have to pick a college.  I have to go and study.  So I left.  I went to school and she stayed behind.  I carried the thought of if I made the right decision for several years as I moved into this new identity within a University. Slowly I moved on and I did my schooling, and I graduated. I traveled for a semester abroad, I interned in New York City… I did what I could but there was always an end in sight and a move being planned.

Once I graduated I finally thought, okay this is it, I have a true break.  And I ran with it.  I backpacked around Southeast Asia for a couple months and it was one of the greatest experiences that changed my life, but you know what, this clock kept ticking and while my friend continued on for another month or two, I went home because it was time to get a job.  How insane is that, as if the job market would dry up in my one extra month traveling?  But I was 23 years old and that is what society was telling me.  This pressure building (all my friends were working and growing up and I was traveling) until I was in true paradise and only thinking of what job I will get. So I ditched the backpack, moved to Los Angeles, and got a job. This was 2010.  5 years later I have been working almost every single day of my life.  Sure I had weekends and holidays, but with the exception of a 2-week Christmas/New Years break in which I’ve done a solo backpacking trip two years in a row (life changing!), I never had time to just be. To wake up and just breathe in the day and enjoy it without the worry of tomorrow…

I don’t know about you, but I am not wired to exist that way.  I think there is a reason that so many other countries have a society in which true vacation time is an essence of their being and culture.  Australians get 6 weeks a year of vacation time.  Europeans get at least 4.  Switzerland 5.  We… we get 2 and not one person I know ever feels comfortable asking for time off… as if we are doing something wrong.

“The US is the only advanced economy with no national vacation policy. One in four workers, typically in low-wage jobs, have no paid vacation at all. Those that do, get, on average, 10 to 14 days a year.” – The Washington Post

It’s an ever-mounting pressure of Monday through Friday so we can cram a weekend full of dinners, drinks, and late night pizza.  Then we blink and it’s Monday.  5/2 ratio… And Sunday barely counts because I get so bummed out by 5pm knowing I have work the next day that I may as well just go into the office.  That is no way to live.

For the past year I have been thinking about quitting my job.  But knowing that I will be met with so many questions and concerns – what will I do, where will I get money, what if I can’t get another job, what is my plan?  The insurmountable pressure of this alone led me to stay complacent for an entire year.  Do you know what being complacent does to your creative soul?  It absolutely crushes it.  You clock in, you clock out.  You simply live within a median.  In particular and for me, I literally was living for the weekend.  So I could go on an adventure, explore something new, be with friends, travel…

I moved out to LA for a reason.  A purpose.  To pursue this dream and I wasn’t helping my case by working a dead end job.  So…. I quit.

Back to this ticking clock.  Well Facebook, thank you for that.  All I see are engagement photos, baby photos, family photos.  And here I am in Los Angeles, 4000 miles from my family and so very single (which at least helps my financial situation).  I haven’t had a girlfriend in two years, and the past few I did have, well… I can leave it at that.  Maybe it’s my fault though because I wasn’t who I should have been.  I was bored in my life.  Who I am deep down, is an extremely energetic and full of life person.  I believe it to be contagious.  And it was, only once they took it, I had to go and find it again.  I guess I have been looking ever since, picking up a piece here and there.  But finally I realized that I needed more – and I don’t need a person to make me happy – I just need to hit the reset button and get back to who I was all those years ago… before life happened.  Before the ticking clock.  Before the girls.  Before the job.  Before the surmounting pressure.  Just get back to me and the simplicity of enjoyment in life.

“Life moves pretty fast. If you don’t stop and look around once in a while, you could miss it.” – Ferris Bueller

When I have thrown caution to the wind and broke the norm of American society I have met some of the most amazing people and discovered some of the most amazing places I could’ve ever dreamed.  The girl I met in Chaing Mai at Muay Thai Boxing Match, the girl I met while getting lost in Cusco, Peru.  The strangers I celebrated my 28th birthday with with a bonfire on the beach in Costa Rica.  These are people and memories that will stay with me and shape me as a person… stories I hope to one day tell my kids and encourage them, that time, should be forgotten once in a while.

So my plan?  I will be focusing on Locals Only full time, trying to make this dream a reality… but first, I am doing what America was founded on… Exploration.  I am road tripping up through the Pacific Northwest into Vancouver, over to Banff and Calgary, and then down through Montana, Wyoming, Utah, Arizona and back to LA.  I have the first 3 nights booked (Camping in Big Sur and Yosemite) and then it will be playing it day by day.  I’ll have the luxury of time, which is a gift none of us should ever overlook.  The luxury of doing what I want, when I want… stopping here or there, breathing and taking it all in… I will get to be my truest self.  I will get to meet strangers and make friends.  Eat new foods, drink new beers, and see things I have never seen.  And to me, that is what life is about. That is living.  So when people ask me, what am I doing? I’ll simply tell them… I’m pursuing happiness.

You can keep up with my journey by following this site (www.localsonly.com) and on Instagram (@bendersd + @LocalsOnly) or Facebook. 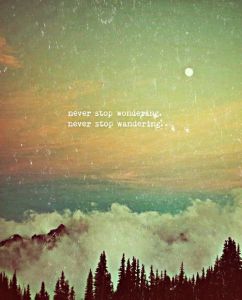 4 Responses to Why I Quit My Job (and Decided to Road Trip): The Pursuit of Happiness